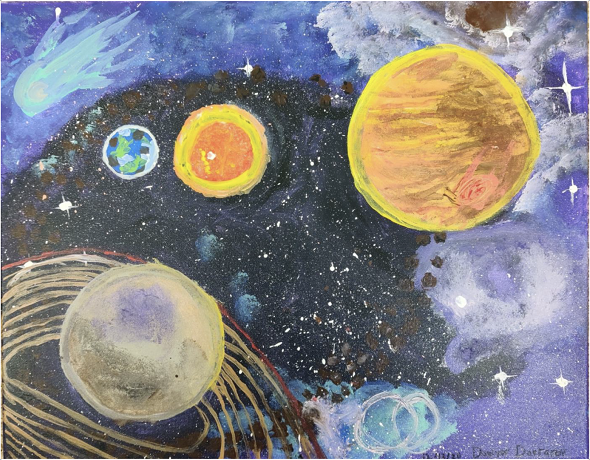 We want to congratulate our Online Academy students who participated in the AstroArt Contest through The Ohio State University. This was a unique opportunity to extend gifted students’ thinking and creativity.

The AstroArt Contest was an international competition receiving entries from five countries and three continents. People of all ages participated. Three Hilliard students received placements in their age bracket.

Third-grader Doniyor won first place in his age bracket.  His artwork, “The Great Conjunction,” is featured on this page.  The piece was described as when the ‘Great conjunction’ of Jupiter and Saturn formed a ‘Christmas Star’ on the winter solstice. Jupiter and Saturn had their closest encounter in almost 400 years on the solstice, December 21. On the last solstice of 2020, December 21, Jupiter and Saturn appeared the closest together in the night sky in 4 centuries.

These Online Academy students are engaged learners that participate in class as well as gifted extension work.

Follow @bradleyhs Follow @bradleyhs
This is not an official web site of the Hilliard City School District. The Hilliard City School District does not control and cannot guarantee the relevance, timeliness, or accuracy of the information on this web site. Any views or opinions expressed herein are solely those of the creators of this web site.
Back to Top
Skip to content