The Memorial Middle School choirs have established a tradition of excellence over the last several years. Over 150 students participate in the Memorial Choirs.  The Choirs perform a variety of repertoire in contrasting styles and genres.  They have consistently received Superior and Excellent ratings at OMEA Large Group Contest and have been crowned Grand Champion at the Music in the Parks Competition at Cedar Point for several years.  They have also been the recipient of the distinguished Esprit de Corps award through Music in the Parks in both 2012, 2013, & 2014.

In June 2016, the MMS Choirs made their Carnegie Hall Debut as a part of the Songs of Inspiration and Hope, under the direction of Mrs. Lori Loftus of the Southern California Children’s Choir. 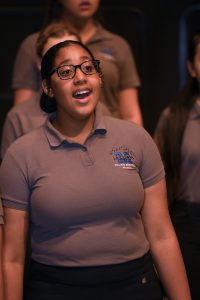 The MMS Choirs are under the direction of Ms. Kelsey Burkett & Mr. Jeremy Witt.