The A.P. Psychology fair was a hit 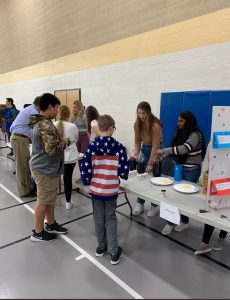 Students in A.P. Psych explain their project to eighth graders from Memorial. Photo by Mrs.Waller.

For this fair, each group of students were assigned one of the five senses. Touch, taste, smell, sight, and hearing experiments were conducted all through the field house at Bradley. Anna Alford (11) explained that the fair was “a fun way to learn new information about the five senses. With a test on sensation and perception approaching,” Anna says, “it was helpful to see these principles and theories in action.” A lot of students agree that the fair was, ultimately, a help in understanding the concept of the unit. This fair was used as an outlet of creativity for students to get out of a traditional classroom and participate in something fun. The students had five days to complete their boards and come up with unique experiments to showcase their sense. Faith Blackwell (11) elaborated with the difficulty of finding an experiment saying, “it was a challenge to find a good experiment I could explain to someone that had never taken the class.” Coming up with an experiment that helped demonstrate a sense was an important task for these psychology students. The experiment had to be clear and concise, something that any middle schooler could understand.

The memorial eighth grade jaguars attend the fair in hopes to find out what A.P. Psych has to offer. Once they were dropped off, the eighth graders spread across the field house, searching for a cool experiment to be a part of. Mrs.Waller, an A.P. psych teacher, says that the eighth graders “told us how important it is to be at the student stations so they can describe their experiment and by doing that helps them learn more. These eighth graders helped so much that next year we are hoping to bring in more middle schoolers and maybe some high schoolers.” Anna Alford says, “it was really fun to work with the eighth graders because they don’t really know any of the information, and they’re surprised to see the reality of our senses and how we really perceive them.” These middle schoolers all seemed oblivious when they walked in, not really knowing what they were getting themselves into. Anna’s little brother, Joe (8), said that “[he] was only excited to get out of class but [he] ended up actually having a good time.” These young kids were engaged and “so fun to work with because we were able to teach them something that was interesting to us and they actually listened and tried to understand,” says Faith. “Explaining my experiment to them helped me get more familiar with how everything works.” A lot of students agreed that having to explain everything the eighth graders helped them understand the unit more. Elizabeth Hieton (11) says, “it did help me learn by explaining the experiment because I always learn better when saying this out loud.” These eighth graders were not only able to experience a similar assignment they will have to participate in but they left understanding how our senses work.

This fair ended and the eighth graders left having a feel for what to expect when it’s their turn to learn about psychology. This project was lengthy, but a lot of students benefited from it. Having to explain the actual concept helped prepare these A.P. psych kids for their upcoming unit test. It was a fun day to be a social studies kid, getting to be involved with high school students and playing around with some experiments. The psych teachers put on this fair every year and not once have they had a bad time.