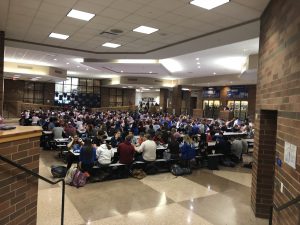 Students are on their phones during lunch instead of talking to one another. Photo taken by Jayla Shanmugam (11).

In this day and age, all of us have smartphones and are addicted to texting, using social media, and taking selfies. But when is it okay to use our phones? Does that answer differ based on the ages of phone users? Phone etiquette is a big debate between children and adults. Most kids seem to think that almost anytime is appropriate to use phones. Some teens even text when they know it’s inappropriate. In contrast, older adults argue cell phone users should only be on their phones when it is considered appropriate–but this is up for debate.

The Jaguar Times investigated if this statement was true and asked Mr. Dellapina about what his age group thought about phone usage. He said, “Phones should be used in moderation; it should not be constantly glued to your hand. It is fine to use phones for texting family members and friends.” This verifies that some adults think phones usage shouldn’t be a constant habit but only used when needed. A lot of adults seem to think that using your phone for communication is okay in most situations, but scrolling through social media is not. Older adults seem to want teens to be more present while with their friends and family.

Mr Witt, a millennial, seemed more relaxed about phone etiquette and said he uses his phone in “most situations” and is fine “as long as you are not in the middle of a conversation”. Mr. Witt alludes that phone usage has a green light at the dinner table and most other places as long as the user is not speaking directly to someone. This is quite a shift from an adult that is a little older, like Mr. Dellapina who explained that phones should only be used when necessary.

Students seem to be even more relaxed. Madison Marshall (12) said that “phone usage is appropriate anytime as long as the user is not driving. When my friends and I are hanging out I will be on my phone.” This lack of etiquette was even more relaxed than adults, as Marshall explained that she would be on her phone while with friends. Penellope Kern (11) agreed, “I will use my phone anytime as long as the environment is relaxed.”

Phone etiquette is extremely different based on age groups. Older generations who didn’t get technology introduced until later in life are very strict and believe phones should only be used when needed. Adults in their twenties agreed that it was alright as long as the user wasn’t with people having a conversation. But, teens argued that phone use was something that was always appropriate as long as they were not driving. Clearly age plays a big role in phone usage this day in age. Maybe  the older generation is right, teens should stay off of their phones more and be more present!