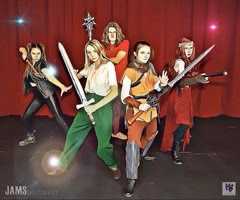 The main cast of She Kills Monsters poses for a D&D style photo Photo by Bradley Theater.

Hilliard Bradley’s theater troupe put on their winter show, She Kills Monsters . For those of you who weren’t able to make it, Rachel Moore (director) described She Kills Monsters as “the story of Agnes Evans, a girl who embarks on a D&D (Dungeons & Dragons) adventure in order to learn more about her deceased teenage sister, Tilly. Through the D&D module, Tilly’s world of fantasy comes to life as Agnes battles a horde of different monsters in order to complete the quest for the lost soul of Athens”. This was a serious yet hilarious show at the same time, making it incredibly fun to watch. One of the more serious topics is bullying of LQBTQIA+ people, especially youth. This was addressed as part of Tilly’s D&D module since she herself was a part of this community and faced bullying. Also addressed was losing a loved one. Agnes lost her sister and parents in a car crash and throughout the show it is seem that she struggles to deal with that grief, but towards the end she reconciles her relationship with her little sister Tilly and is able to overcome her challenges.

This show meant a lot to both the students and faculty who were a part of it for many different reasons. Shay Roth (11), who played Agnes Evans, explained that “this character was super important to [her] because it was [her] very first lead in a play, and the character showed [her] different aspects of life throughout the play”. Agnes underwent a lot of changes from beginning to end as she searches for her happiness after losing her family, and she is eventually able to find peace in her life which is very inspirational to the audience watching the show. Sophia Grounds (9), who played Lilith Morningstar, shared that “[she] had a lot of fun rehearsing, though [she] missed tech week and opening night because [she] was home sick with the flu. Being away from it for a week was really disappointing but [she] think[s] it made [her] performances that much better, since [she] was just so ready to jump back in with [her] cast and crew!”. Sophia definitely shined during the two performances she was in and really brought the sass that is Lilith. 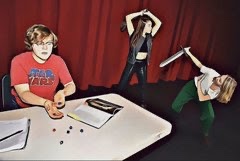 Members of the cast of She Kills Monsters practice D&D fight choreography Photo by Bradley Theater.

The director of this show, Rachel Moore, also had a lot to say about why this show was important to her. She told the Jaguar Times that she was “so pleased with the outcome of the show. We got a lot of great feedback from the audience, and [she] was so proud to be able to tell a story that highlighted and celebrated the LGBTQIA+ community. Unfortunately, you don’t get to see those kinds of stories told very often on a high school stage. [She] feel[s] lucky and honored to be able to showcase a story like She Kills Monsters at Bradley”.

Overall, She Kills Monsters was an amazing show that managed to be comical yet serious at the same time. It’s the perfect combination of laughing crazy hard and reflecting on issues in today’s world. The students and faculty all did a great job with this production and would like to give a big thank you to everyone who came out!