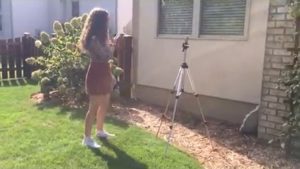 Kylee Queler is a Junior at Bradley.  At first, she seems like a normal teenage girl who loves her friends and family, but as her neighbor and friend I know there’s more to her. She began learning ASL (American Sign Language) due to her mom being HOH (Hard of Hearing) and the possibility of her possibly going deaf in the future.  Kylee says she wants to “be able to help her and my family learn ASL” if this were to happen. She grew to love ASL and started recording videos of herself signing songs she likes and her friends and family encouraged her to post them on Musical.ly and eventually a YouTube channel. She started her channel in July of 2017, and it has grown far beyond what she imagined it would.  She now has around 40 videos up on her channel of her signing to different popular songs, her most viewed video being “Old Town Road (Remix)- Lil Nas X feat. Billy Ray Cyrus (ASL/PSE COVER) Sign Language” with 310k views. Her channel has grown to the impressive number of 9.61k subscribers and that number continues to increase. Kylee doesn’t think this is anything special though and has stayed humble as her channel grows and gains recognition, saying she her happy her channel has “reached more and more people” (Kylee Queler, 11)

Most people would agree that this is an amazing accomplishment though.  Her ASL teacher, Mr. Tackett had some wonderful things to say. He said his favorite video was Look What You Made Me Do and complimented her by saying “She definitely shows passion for the language” (Mr. Tackett), but also noted that while “she shows emotion in her videos, she could work on improving her form” (Mr. Tackett) since she was originally self-taught.  After speaking to one of her ASL classmates, Andie Miller, it was clear that students love her videos as well. Andie said her favorite video of Kylee’s is Old Town Road and explained that she “like[s] how depending on the song she dresses appropriately to what she is signing to” (Andie Miller, 11).  One of Kylee’s best friends, Kelvany Cleveland, commented that “Kylee’s channel spreads positivity in many ways and places smiles on people’s faces” noted Kelvany Cleveland, 11, which I agree is very much true.

Many people love Kylee’s channel, especially within the Hilliard Bradley community.  I know I definitely do because I think it is very inspirational to see someone sharing something they love to do with the world.  ASL is such a beautiful and unique talent and she does it with such passion you can’t help but want to learn as well. My personal favorite is Look What You Made Me Do, although I must admit I love them all.  She has an amazing story as well with her mom’s trouble hearing which only wants to make you watch and suppress even more.  Keep signing and following your dreams Kylee!